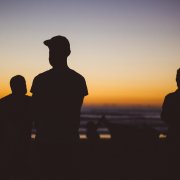 Around the world millions of young people work tirelessly each day by using their voice to make positive and lasting change. Young people are not only fighting for their own future but for the future of billions of other individuals and for generations to come. There are approximately 1.21 billion people aged 15-24 years old, which accounts for 15.5% of the total global population. They use their voice to protest and bring awareness to issues such as climate change, to defend their human rights, stand up when being mistreated and address the lack of or failure to take action by governments.

The concerns of young people are often overlooked and undervalued by society as a result of age-based discrimination. It is increasingly common for young people to hear the words ‘you don’t know what you’re talking about’ or ‘you’re just a kid’ when expressing their concerns about serious social and economic issues. Manu Gaspar, a peaceful protester from the Philippines says that he wants ‘world leaders to listen to young people and their concerns, rather than making condescending remarks.’

In the UK there are many organisations which promote the interests of young people such as The British Youth Council and the UK Youth Parliament. The British Youth Council is a great example of whose work is dedicated towards empowering young people, promoting their interests and representing their views to the government and decision makers at all levels. In addition, the UK Youth Parliament elects individuals aged 11-18 years to bring social change through campaigning. On a wider scale, the European Youth Forum gives a platform to youth organisations in Europe and the Commonwealth Youth Programme works internationally, in 54 countries, to empower young people. These organisations encourage young people’s participation in society and policy because they value their ideas and concerns.

However, the picture is very different across the world, especially in developing countries. In developing countries young people are excluded from any political decisions that will have an immediate and long-lasting impact on their future. It is estimated that 87% of people aged 15-24 live in developing countries which shows the extent to which individuals have little to no control of their future. It is particularly hard for young people to stand up for their rights and beliefs in developing countries because they face a variety of obstacles such as war, dictatorship or lack of resources which all have their own associated risks. Individuals face police brutality, imprisonment, torture and in extreme cases, can lose their lives. Out of fear, many make the difficult decision to not speak out or support those who are brave enough to do so. For example, Manu Gaspar, protests in the Philippines to protect his human rights and consequently faces police brutality and the risk of being shot.

In 2012, Malala spoke out publicly about the importance of girls attending school and their right to education after the Taliban took control of her village and banned girls from attending school. Consequently, she was targeted by members of the Taliban and was shot in the head on her way home from school. Malala had the courage to raise awareness for what she believed was not only important to her but other girls even though it placed her in an extremely dangerous situation. Since her recovery, she has continued her work to advocate for girls and established the Malala Fund, which is dedicated to giving every girl an opportunity to achieve a future she chooses. She has been a recipient of a Nobel peace prize and attended Oxford University. The Taliban tried to take her voice away and show others what was to come if they continued to stand up and speak out for their rights. This shows the extremes that people will go to, to suppress the voices of others and how age has no effect on their decisions.

The voices of young people are very powerful and with the use of social media are amplified. Social media is a tool that can be used to not only relay information to a larger audience and spread awareness but allow for movements to take place globally. Following the 2018 Marjory Stoneman Douglas High School shooting in Parkland Florida, the students announced a march in order to demand gun control reform after 17 of their classmates lost their lives. In addition, they created the ‘Never Again’ campaign in order to prevent tragic events like this occurring in the future. With the use of social media, #MarchForOurLives was used over 3.6 million times and allowed the issue to be broadcasted globally. As a result, this attracted the attention of a number of celebrities who donated to the cause and corporations who decided who cut ties with the NRA.

Furthermore, the march attracted millions of individuals and turned out to be the largest single day protest. The group successfully influenced hundreds of thousands of young people to register to vote and in turn there was a historic youth turnout in the 2018 midterm elections which resulted in 46 NRA backed candidates to lose. Although bills to tighten gun restrictions are on hold in congress, progress has still been made in other areas. For example, Florida announced the ‘Red Flag’ legislation which allows the removal of firearms from individuals showing signs of violent behaviour, the age to buy a gun was increased to 21 and the US Department of Justice banned bump stocks. This shows that young people have the power to make change and but just need the chance. The changes made to legislation were influenced by millions of young people who demanded change.

Furthermore, Greta Thunberg, an environmental activist, staged a protest outside the Swedish parliament to demand a reduction in carbon emissions in line with the Paris Agreement. This event gained a lot of publicity and started an international climate movement called Fridays for Future whereby students skip school to demand action to be taken towards tackling climate change. Social media has allowed this movement to be backed by over 14 million students who protest in 7500 cities on Fridays. Although no significant and immediate policies have been implemented to reduce environmental degradation, there is an ‘army’ of individuals who have taken immediate action by changing their lifestyles and encouraging others to do the same because of inaction taken by world leaders.

Aditya Mukarji embarked on a door-to-door campaign in India to stop the use of plastic straws. Within 5 months of hard work and dedication he was able to replace over 500,000 plastic straws in New Delhi with environmentally friendly alternatives. Over the course of two years Aditya prevented the use of 28 million plastic objects by persuading 150 establishments to go plastic-free. This begs the question; how much plastic use could be avoided in a nation with over one billion inhabitants if the government adopted a plastic straw ban? This indicates how influential young people can be and the impact they can have in their local communities. That is why it is crucial that world leaders recognise the issues which are being highlighted by young people and work with them to achieve an outcome that will be beneficial to society.

Giving young people the opportunity and platform to have their voices heard is extremely important as they are the future. Any decision or policies enforced now will have a greater impact on young people than any other group in society. We all know what greatness can be achieved when people work together so it is vital that world leaders, people of influence and power not only work with young people but become more open minded to the idea of change. It begs the question: what position would we be in if world leaders took more notice of the voice of young people? It is important to note that change cannot take place overnight but with hope, dedication and hard work we can work towards a brighter future.