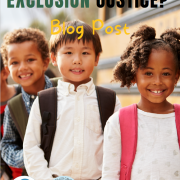 For the academic year 2020/2021, the UK government website has reported 352,454 cases of suspensions and 3,928 permanent exclusions in England. The most frequent cause of exclusion reported is continual disruptive behaviour, accounting for 42% of suspensions and 39% of permanent exclusions. [1] The Challenging School Exclusions report by JUSTICE (2019) highlights that since 2012 the number of permanent and fixed school exclusions in England has increased year on year. These statistics far outpace those in Scotland, Northern Ireland and Wales, and significantly affect students from ethnic minority backgrounds and those with special educational needs and disabilities (SEND). [2] For example, research involving the University of York indicates that there were 7,900 permanent exclusions in England compared with only 3 cases in Scotland between 2017/2018. On an international level, we fared even worse as a country with the school exclusion rate in the UK being 10 times higher than any other European country. [3]

These alarming statistics do not end here. An article by The Guardian refers to the data as only “the tip of the iceberg”, with research suggesting that 5 times more young children are being schooled in alternative provisions for excluded students than the actual statistics dare to admit. [4]

The Timpson Review of School Exclusion in 2019, commissioned by the government, has acknowledged and established that not all school exclusions may have been legal, justified and completely rational. [5] In addition, the aforementioned JUSTICE report has raised some critical concerns in regard to school leaders’ poor decision-making, their inconsistent understanding of legal duties, high occurrence of informal exclusions and potentially unlawful “off-rolling”, and calls for a systematic reform for school exclusions that demands an approach that is robust, consistent, fair and also considerate to a child’s individual needs. [2]

“Off-rolling” is described by Ofsted as “the practice of removing a pupil from the school roll without using a permanent exclusion, when the removal is primarily in the best interests of the school, rather than in the best interests of the pupil. This includes pressuring a parent to remove their child from the school roll”. [6] “Off-rolling” has also often been perceived as a tactical move by school leaders to remove poor-performing pupils that are likely to lower the school’s national test performances (such as GCSEs) to manipulate their academic standing, or the so-called “gaming” the league tables. [7] SEND and disadvantaged students are strikingly the most affected. [8] In a 2017 briefing to MPs, the Children’s Commissioner claimed that 89% of mainstream schools in England would have lower GCSE pass rates if the results of those students who had been off-rolled or moved to alternative provisions between Year 7-11 were included in their yearly results. [9] Furthermore, an interesting study conducted by Done and Knowler (2021) involving 21 senior school leaders suggests that schools potentially are aware of loopholes of how allegations of “off-rolling” can be evaded. More importantly, the study demonstrates school leaders’ reluctance and defiance to openly discuss the topic as evident by their low number of participants, with only one head teacher willing to be interviewed face-to-face despite widespread advertising. [10]

But is it entirely the fault of the school? Findings by Machin and Sandi (2020) contested the idea that “off-rolling” is mere “gaming” [11], and their research suggests a greater systematic failure that is due to conflicting interests between a political obsession to maintain academic standards and a goal to allow for inclusive education. [12][13] Underfunding, limited resources, overworked staff, low pay, burn-out teachers forever leaving the profession– schools are at their wit’s end, forced to find ways to work around harsh restrictions. School exclusion becomes a tool used by those in power to mask an inability to effectively carry out inclusive education, and to exert dominance over those who are marginalised.

An Infinite Loop of Social Reproduction

School exclusions can have serious, long-term impacts on young people, but they can also incur serious economic costs with an estimate that each unit of permanently excluded children will go on to cost an astonishing £2.1 billion in education, criminal justice, health and benefits over their life. [4] Many global studies including The Edinburgh Study of Youth Transitions and Crime, performed by the University of Edinburgh, pointed to a “school-to-prison” pipeline. [14] This includes Natalia’s uncle who was excluded in Year 7 and since never returned to school and was in the end imprisoned. [15]

The Edinburgh Study found that pupils that are excluded from school at the age of 12 are 5 times more likely to be imprisoned by the age of 24. In addition, boys and children from single-parent and low-income families are found significantly more likely to be excluded. Conversely, it is discovered that students with equally poor behaviour from two-parent families and more affluent backgrounds are more tolerated by schools and less likely to be excluded as a result. Professor Lesley McAra, Head of the University of Edinburgh’s School of Law, argues that their study ultimately shows that the criminal justice system is being used as a way to admonish socially marginalised groups and members of society who are living in deprived communities and are vulnerable. [14] This creates a cycle of social reproduction where marginalised groups continue to be oppressed in favour of those in power and exacerbates the hierarchical culture in society.

With Sean Harford, Ofsted’s national director, going as far as to admit in 2019 that schools in areas with greater poverty continue to be less likely to be rated as ‘good’ [16], it seems that a great educational reform is in need to have any hope of removing such a deeply rooted and troubling characteristic in British education.

[4] Weale, S, (2017) ‘School exclusions data in England only “the tip of the iceberg”’, The Guardian, 10 Oct. Available online at https://www.theguardian.com/education/2017/oct/10/school-exclusion-figures-date-england-only-tip-iceberg (Accessed: 30 September 2022).

[7] Ofsted (2019) The annual report of Her Majesty’s Chief Inspector of Education, Children’s Services and Skills 2017/2018. Available online at: www.gov.uk/government/publications/ofsted-annual-report-201718-education-childrens-services-and-skills

[12] Done, E. J. (2019) ‘Education governance and the responsibility to include: Teachers as a site of dis-cursive tension’, in: J. Allan, V. Harwood and C. Jørgensen (eds) World yearbook of education 2020. London: Routledge.